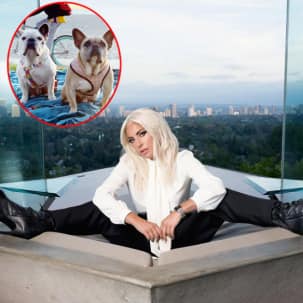 All dog lovers emphasized with Lady Gaga as she revealed how her heart was “sick” after her two French bulldogs, Koji and Gustav were stolen. Two days ago, in a shocking incident her employee, Ryan Fischer was shot at by thieves who escaped with her two French bulldogs, Koji and Gustav. But they were returned to the cops. The Los Angeles police tweeted, “Lady Gaga’s two French bulldogs – stolen two days ago by thieves who shot and wounded the dogwalker – were recovered unharmed today.” On February 24 at around 9.40 pm, the thieves caught hold of the dog-walker and demanded that he hands over the three French bull dogs. Also Read – MTV EMA 2020: K-pop band BTS wins four big awards — see full list of winners

Both of Lady Gaga’s dogs have been turned in to a local police station, and they have been safely reunited with Lady Gaga representatives. https://t.co/c5Z5QMa944

On Feb 24 at approx 9:40pm the victim was walking 3 French bulldogs in the area of Sierra Bonita & Sunset. The suspects approached the victim in a white Nissan Altima.

Two suspects exited the vehicle & demanded the victim turn over the dogs at gunpoint.

The owner of the stolen dogs was identified to be the celebrity known as “Lady Gaga.”

The victim is in stable condition.

If anyone has videos/photos of this incident email SAFELATIPS@lapd.online

Lady Gaga wrote on Instagram, “My heart is sick and I am praying my family will be whole again with an act of kindness. I will pay $500,000 for their safe return.” While the two dogs, Koji and Gustav were taken by the miscreants, the third one Miss Asia ran away from the scene. Also Read – Priyanka Chopra shares DIY hair treatment, says, ‘My mom taught me, and her mom taught her’ — watch video

She later returned to the scene to the wounded man before law enforcement agencies took it away. Ryan Fischer is now in the hospital and stable. The Los Angeles Police is investigating the case of robbery and homicide. Also Read – Priyanka Chopra thanks Lady Gaga and World Health Organisation for raising $127 million for Covid-19 relief

Celebs like Kate Hudson, Tony Bennett and others sent love. Maria Menounos wrote, “I’m sick over this. Ryan was such a hero even after being shot he was letting people know the babies were taken. He’s an angel -praying for his recovery and for your babies to come home safe. Your babies are our babies, it’s as if it happened to us-meaning your fellow animal lovers.”

Hey there! BollywoodLife.Com Awards 2021 are back and Voting is Now Open!
Click Here to Vote for Your Favourites and Stand a Chance to WIN Exciting Prizes.