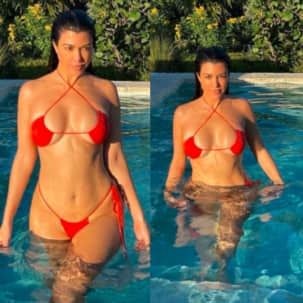 Kourtney Kardashian has again sizzled on social media. The stunner showed off her curvy frame in a bold red bikini that would give second thoughts even to the most uninhibited folks out there. Kourtney Kardashian posted pool pics in a tomato red bikini that showed off her decollitage and hips like never before. The Kardashain sisters have always flaunted their bodies with elan, and Kourtney is no different. The lady put three pictures. In one of them we can see her coming out of the pool, water dripping from her hair. In the other pic, we can see more of the background that has bright yellow flowers. However, it is the third pic that gives us a good view of the daring swimsuit. Also Read – 2020 Recap: From Tom Cruise shooting in space to Brad Pitt-Jennifer Aniston’s reunion to Madonna’s bathtub video — these were the top newsmakers in Hollywood

Fans pointed out that the sexy bikini is from the brand, Sommer Swim. It looks like the bottom, which is in Naomi tie-side style is like a thong. However, the lady did not pose with a back profile. The top is from the label Xena. It looks like the price of the bikini set comes to around $170 dollars. In India currency, it is around Rs 12, 265. Well, that is quite a bit for less than half a metre of fabric. Also Read – Keeping Up With The Kardashians to air its last season in 2021 — read official statement

As of now, she is dating Travis Barker. Fans pointed out how good she looked despite being a mother of three. The lady was in a relationship with Scott Disck for a long time. They broke up and tried to reconcile but things did not work out as expected. Also Read – Kim Kardashian gifts bottom workout machines to family for Christmas

Sleds, snowmobiles and planes: How COVID-19 vaccines are distributed in rural Alaska