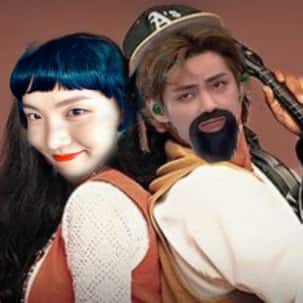 BTS is on a roll. Some days back, they had the Sowoozoo Muster 2021 where they performed on a number of songs. They gave a performance on Daechwita, which is originally a solo by Suga. Those who have seen the video know that Min Yoongi is dressed as a mad king in a hanbok belting out some crazy breathless rap. All the members performed on it. The funniest part was seeing Kim Taehyung with a beard. The vocalist was later tied with a rope on stage with a funny sequence of RM beheading him. Fans are unable to get over that avatar of Kim Taehyung. Memes of #Taechwita have flooded social media and ARMY is ROFL seeing the genius of some meme makers. Also Read – BTS: You’ll be zapped to know about the most expensive things owned by Jungkook, Jimin, J-Hope and more

Well, Kim Taehyung’s Taechwita memes have come to Bollywood. We are seeing him in Dilwale Dulhania Le Jayenge, Kabir Singh and Yeh Hai Mohabbatein. Just the sight of them will make you laugh out loud. Taehyung is known for his spontaneous funny self and these memes will just drive away the blues… Also Read – BTS: Kim Namjoon aka RM’s personal studio proves he’s a connoisseur of the fine arts — view pics

If Kim Taehyung actually has a personal stan account then he should be dead by now, just while laughing so hard ??, oh god! People are so creative….#Taechwita #BTSV #lionKing? pic.twitter.com/qfqkE3s2Fr

We don’t know how Kim Taehyung is feeling watching these memes but we’re sure he will be having a laugh too. The handsome vocalist has a huge fanbase in India. He was also extremely adorable in the interview especially after he got complimented for his fabulous vocals. Also Read – BTS: Throwback to the time when Suga’s EPIC REPLY to rumours of him and RM being a couple left everyone in splits

America is ready to return to normal. Biden’s CDC chief isn’t so sure.